Billy’s first introduction to scuba came by way of his father. At an early age, Billy assisted his dad on various commercial diving jobs along the Mississippi Gulf Coast. In 1978, Billy became a PADI Open Water diver and began exploring recreationally around the globe. It was on a job in Freeport, Bahamas, where Billy’s interest in the “business of diving” was sparked. After diving with UNEXSO, Billy states that he tasted the joy of diving in an exotic location and got hooked! Having grown up around commercial diving and what the business side entails, he discovered that recreational diving is a pleasure which must be shared with others. Diver education became his passion and his career focus.

As a high schooler, Billy exercised his aggressive enterprising skills on the football field. This drive earned him game time on competitive college football and semi-pro teams. Billy pursued his dream of playing pro ball with the Tampa Bay Bandits until the closing of the USFL league in 1986. Billy then went back to college and finished his degree in education and became a high school teacher and coach. Like many teachers, he took on a summer job. One day, Billy decided to trade in his cleats for fins and submerge his classroom. It became apparent to him that he could make a rewarding living in the scuba industry. No lessons lost here. Whether on the field, in the classroom, exploring the underwater world or managing a staff of 50+, Billy applies his education and coaching experience to compile winning teams everywhere.

Along the way, Billy married his college sweetheart, Saudhi. As newlyweds, they moved to California and worked for PADI Headquarters. Working behind the scenes at Headquarters, they learned what makes PADI the world’s largest certifying agency. Charged with ideas, the couple could not resist the urge to jump back in the water again. The Wises departed PADI to follow their dream of growing the dive business. Their baby, Club Caribbean Dive and Travel, Inc. became the first PADI 5 Star IDC in Mississippi and one of the most successful dive retail businesses along the Gulf of Mexico. Returning to Saudhi’s birthplace, the Wises opened a resort destination in La Parguera, Puerto Rico. Club Caribbean continued to expand to a full service PADI Dive Center in Gulfport, MS which also handled reservations for their wholesale location in Cozumel, Mexico. At the early boom of cruise travel, Billy launched a travel business which catered specifically to diver travelers and their family’s needs. Cruising took off and Billy hired a team of outside agents.

In 1994, Billy and Saudhi welcomed Alex who just 4 years later became the first certified PADI SASY Diver in the world. In 1998 his sister, Natassia, came splashing into the world, baby fins and snorkel in hand. As the diverse Club Caribbean staff and family grew, so did Billy and Saudhi’s desire to make a positive impact on the world in a more intimate way. While searching for ways to serve God’s people, the Gulf Coast received a devastating blow. Hurricane Katrina leveled entire communities in Billy’s hometown. Billy sold off his business and began an ___ year period of rebuilding homes, churches and schools. This time led to serving in full time ministry as a Children’s Pastor and later the Headmaster at a private Christian school.

From running construction crews, handing out high school diplomas to serving on the mission field of Africa, Billy maintained his love of the sea. As an instructor he introduced others to the underwater world. As a Course Director since 1994, Billy has had the honor of passing down the privilege to new instructors. Billy returned to the industry full time as Regional Sales Representative for SEAC USA. When given the incredible opportunity to join the Rainbow Reef team, Billy told owner, DJ Wood, “Count me in.” “Working at Rainbow Reef is a riveting challenge, the ride is mind-blowing, innovation is intense but when you’re sitting on the bow of the boat watching the sunset before a night dive, the return is spectacular. 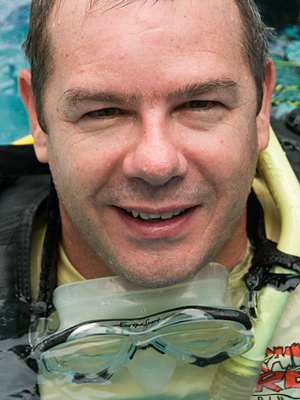